1999: Hendrik Willemyns & John Roan made the world a brighter place with their first soulful EP “Release”. A lot of encouraging gibberish and a few cool compilations later (Café del Mar...), they released “A volta” a collaboration between Arsenal and Mario Vitalino Dos Santos -a brazilian capoeira-teacher they met in the hallway of their appartement- Result : a track so bright that Jockeyslut wrote : “a slow burning epic, which, when it finally kicks in, magically makes big bowls of fruit appear on everyone's heads”. The track hit the dancefloor big time and was compiled worldwide onto various compilations (MTV’s chill out, Phil Ashers’ “Jazz in the house”, Palm Pictures’ “Brasilified” with Jazzanova, Trüby Trio, Da Lata amongst others) Again a lot of blahblah and a set of live-shows later, (Ten days off, Basement jaxx-aftershow, Innercity Amsterdam...) They found it was time to step out of the shadows of “those compiled” with their first full-album, gloriously titled : “Oyebo soul”. As you will notice, this album is not strictly focused on dancing music, it's a symbiosis of Afro and Brazilian vibes, house, some hip hop and rock. The spirit of the album is generously spiced up by cultural influences of various artists who contributed in the making of it. Five tracks are produced by Ray Mang (aka Raj Gupta, Block 16) and there is a whole group of international musicians who contributed in the making of it : Deeply light - aka Jhelissa Anderson, best known for her work with Brand New Heavies and backing vocals for artists like Roxy Music and a solo album on Dorado - from U.K., Marino Vittalino Dos Santos from Brazil, Zeus and Zacharias from Congolese band Bayuda, Dudu from Mali, Ruth Da Costa from Portugal, Divine Elementary from New York and 72 Soul from Brussels. This album is a real melting pot of musical influences from Africa, the Latin world and Europe which have been united by members of ARSENAL in a beautiful musical journey which is probably going to be remembered as one of those albums which have a drift of the summer time thanks to its optimistic, sunny feeling which is present in most of the tracks. When others try to mix different influences the way these guys have mixed afro-brazil-rock-house-hop - others generally end up with something similar to a JB-coke, Arsenal turned their “oyebo soul” into pure brandy!!! (laatste update: mei 2003; bron: NEWS) 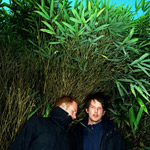