"It uses a comparable approach to Crete Soundies, but to more powerful effect. Where the three pieces on Crete Soundies were overlong and prone to bluster and portent, these sound sharp and self-aware. (...) its superb first two tracks function more effectively as exercises in demystification than in sanctification. Each is a complex site-specific disquisition, exploring the myriad associations of a particular locale, as well as analysing the ways in which they came to be constructed."
Nick Cain, The Wire 333, November 2011, p. 69 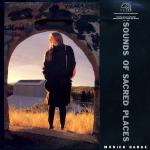