"De Deyster was a Belgian loner who recorded a vast quantity of analogue synth improvisations at home on reel-to-reel, from the mid-70s onwards. His musical endeavours went undiscovered in his own lifetime - he died in sad circumstances in 1999 - but there is apparently a huge archive of amazing recordings whose projected release may now bring De Deyster the accclaim he was never remotely close to experiencing in his lifetime.
Not that his work sounds like that of a man eager to make an impact on the marketplace. This is extremely lonely music, sparse and rigorously undemonstrative. De Deyster's synth work bears no trace of the outer space wonder of ultra-modernist flash so prevalent in other electronic music of the 70s. Instead, it's as if he's plugged his soul into his equipment's oscillators and filters and just allowed his anguish to seep out unmediated. The music seems to follow the contours of his dislocated thought patterns and darkening moods. He might as well be banging on a tea chest and howling at the moon - it's that visceral. So what purpose will the release of these tapes have? It's not that De Deyster is an undiscovered technical wizard who was years ahead of its time, or even that the work has real musical merit - it's so personal, I'm not sure I really know if it's any good. As with much so-called 'outsider art', there's a faint suspicion that it's only interesting because it plays on our voyeurism. But ultimately, there's a purity and a truth to this music that banishes such reservations. Simply put, it connects."
Keith Moliné, The Wire 271, p.57 (01.08.2006) 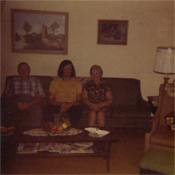